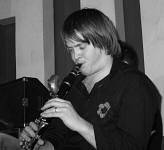 Graham Hughes - Trombone – Since first being introduced to the traditional jazz world some 15 years ago Graham has built a reputation far and wide as a versatile trombone player, also skilled on other instruments including sousaphone, double bass, harmonica and vocalist. Graham has established a reputation playing with many bands over the last few years: starting with Allen Beechey’s Bright Stars of Jazz 10 years ago, he has gone to play with TJ Johnson’s Bourbon Kick, Barry Martin’s Young Bloods, The Charleston Chasers, The Harry Strutters Jazz Band, Martin Litton’s Red Hot Peppers and many others…He began fronting his own jazz band a few years ago under the name of The Sunshine Kings using established musicians on the traditional circuit. This summer he solidified the band by collecting together six young musicians from around London known in other fields of jazz who also had an interest in early jazz. This way he could introduce new musicians to jazz clubs, and help to pass the tradition onto generations of the future. His other popular band is the Brass Volcanoes, and programmed Keswick Jazz Festival for three years. He lives in London and is deeply involved with the thriving music scene there, but is often seen elsewhere with the Tuxedo Jazz Orchestra, Keith Nichols, Enrico Tomasso, Martin Litton and many others, as well as appearing at festivals and clubs as a guest in his own right.

Groups Played For (at CJC)