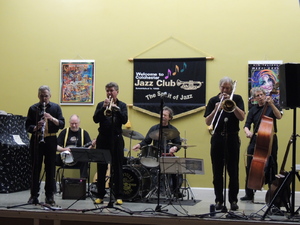 The Storyville Jassband, from Arnham, Holland, founded in 1959, is one of the oldest and most popular Dutch traditional jazz bands. Over the decades, the band has successfully evolved from dedicated followers of the big names in New Orleans Jazz to a hallmark in the traditional jazz scene themselves. Although the band does not confine itself to any particular style, there is a distinct affiliation to British Traditional Jazz. Their CD’s give a good survey of the colourful, blend of styles and interpretations. The Storyville Jassband has performed at jazz clubs and festivals through-out Holland, England, Belgium, France, Germany, Switzerland and Mallorca. The band shows its success by its stability and its productivity. Ten CD recordings of which seven on the Timeless Jazz label, give proof of their abilities. But the real nature of the band comes forward during live performances. There they show their enthusiasm, their energy and their talent for communication with the audience. January 4th, 2009 the band celebrated their 50th anniversary with a Jubilee concert where the great Chris Barber performed as a guest player. July 2009 their latest album “Meet Me Tonight” Live Concert 2009 has been released on Timeless CD TTD662.

Eugene de Bruijn – Clarinet. As a child prodigy Eugène played at a very early age with all th...

Michael Muller started playing trumpet at the age of 12. At the early age of 15 he joined a dixie...

Musical profile not available at the current time.

Plays Double Bass with the Storyville Jassband from Holland

Stef Geurts – Drums. Stef played most of his career as a professional classical musician in Sy...