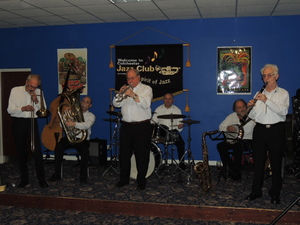 The Original Eastside Stompers The band was formed during the late 1960’s by Ernie Hodgson. During the early days the band used to rehearse in the basement of the bakery that was owned by the grandfather of the band’s bass player John Arthy who went on to form the Pasadena Roof Orchestra. The rehearsals must have paid off, as in 1968 the band performed on Humphrey Littleton’s Radio Jazz Club. Since then the bands personnel has changed several times. The band’s present trumpet player is John Shepherd who is the most recent addition to the band adding a hot lead to all of the numbers. The band’s present clarinet player is Ronnie Findon, who spent most of his musical career playing for the Joe Loss Orchestra, a job that saw him touring the world. Ronnie has recently released a CD of his wonderful clarinet and saxophone playing to celebrate his 80th birthday. The engine room of the band is provided by its rhythm section consisting of ex Temperence Seven drummer Graham Collicot, wonderful chord man and vocalist Brian Lawrence, playing string bass/tuba Roger Graham. Altogether the members make a fine band that not only plays a mixture of New Orleans, Dixieland and Traditional Jazz but also has a lot of fun in the process.

John Shepherd - Trumpet - who is the most recent addition to The Original Eastside Stompers band...

A classical driving trombone player who has played with The Ken Collyer for six years, the Brian ...

Ronnie spent most of his musical career playing the clarinet for the Joe Loss Orchestra, a job th...

Was the drummer in the Temperance Seven band

Double bass and Sousaphone player with The Original Eastside Stompers