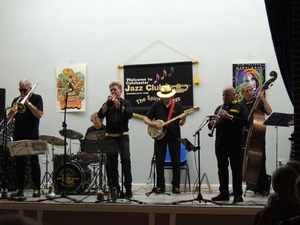 Storyville Jassband from Holland.
Was formed in 1980 by musicians with great experience in the original New Orleans music style. This style, based on the “open” collective improvisation, which so nicely leaves room for each individual musician and instrument, is only too seldom heard nowadays. But Storyville Jassband has ever since continued its contribution to the real New Orleans sound. This is probably also the reason for this band’s successful visits to a large number of well-known jazz clubs featuring New Orleans jazz. Everywhere the music and style of Storyville Jassband is emphasized as representing the most homogeneous and well-played New Orleans sound in today’s Europe. Storyville Jazzband has chosen not to jump into the typical “trad” of “Dixieland” style, but has taken up the many fine traditions from the original New Orleans music, as it was typically played by George Lewis and Louis Nelson’s bands during the twenties and forties. The repertoire, which is continuous expanded with new “discoveries” that fit into the special style and tradition of Storyville Jassband, is based partly on numbers from the era, and partly of tunes with roots in the old American folk song tradition, also added a touch of the original gospel tunes and hymns. Storyville Jassband is a very exceptional experience; the feeling of the real New Orleans music is here much more close and alive. At one moment you feel like being a part of the heavy swinging rhythm, and in the next you will be fascinated by the beautiful wind playing and the intense atmosphere in a quiet hymn. And this is exactly the way you also can hear Storyville Jassband on the live CD-recordings “memories From Oland” and “Painting The Clouds”, both with concert recordings from the island of Oland. For those who have not experienced Storyville Jazzband themselves, there is really something special looking forward to.

Stef Geurts – Drums. Stef played most of his career as a professional classical musician in Sy...

Plays Double Bass with the Storyville Jassband from Holland

Tony Stuip - Banjo/Guitar. Tom is without doubt one of the most important professional banjo pla...

Michael Muller started playing trumpet at the age of 12. At the early age of 15 he joined a dixie...

Eugiene de Bruijn – Clarinet. As a child prodigy Eugène played at a very early age with all t...