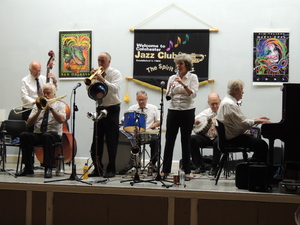 New Orleans Heat A seven piece band playing the old style New Orleans jazz, recreating the music of the crescent city, be it stomp, blues, hymn, spiritual or pop song of the day in the style of the late great Bunk Johnson, George Lewis and Kid Thomas bands. Our motto is “helping to keep the real jazz alive”.

Dave Vickers – Trombone –Dave has been on the music scene for many years. Playing in the 197...

Richard Church – Trumpet/Cornet. I first started playing the cornet at school and then went on...

Ray Bowden -Drums. Began playing drums when living in Holland in the 70s. My Greatest influenc...

Rob Smith. I paly the banjo in the New Orleans Heat Jazz Band