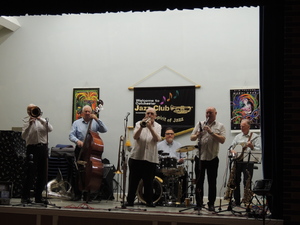 CLUB CLOSED due to the Corona Virus
===================================
Matt Palmer’s Eagle Jazz Band – Matt Palmer had recently folded his Millennium Jazz Band in order to revise the Eagle Jazz Band, the original Eagle Jazz Band was formed by Ken Ingram and Bob Smith in 1951 and continued to delight audiences worldwide for an amazing fifty-four years, one of the longest formed bands in the UK. The Eagle Jazz Band sports a healthy combination of youth and experience. Pete Brown (trumpet and valve trombone) and Brian Lawrence (bass) were both long serving members of the Eagle Jazz Band after initially forging their musical partnership in the Potteries based Mardi Gras Society Band during the 1970’s. Matt Palmer (clarinet and saxes) joined in 2004, having worked extensively with Pete at Alton Towers Theme Park in Staffordshire. Baby Jools has added youthful vigour in the engine room to allow the band to fire on all cylinders when required, along with Brian Mellor (banjo) and Terry Williams(trombone). The collective experience amassed by the current line- up includes top UK theme parks, cruise liners, major UK and European Jazz Festivals and Radio and Television broadcasts. The wide repertoire is drawn from popular songs from the 1920’s, 30’s and 40’; Classic Jazz compositions by King Oliver, Louis Armstrong, Jelly Roll Morton and Sydney Bechet plus New Orleans Marches, Rags, Stomps, Blues, Swing and instrumental features. Some band members are multi-instrumentalists, enabling them to play a variety of different sounds and styles each played in a happy, entertaining manner, many featuring vocals. What-ever they play; the major priority is to entertain the audience but to always maintain a high standard of musicianship and presentation. The Eagle Jazz Band has made their mark in several UK jazz clubs and at society functions (where they are equally at home) and have a healthy diary for the coming months.

Brian Mellor – Banjo - Brian was born and bred in Birmingham, he played with various bands in t...

Matt Palmer – Clarinet, saxophones and vocals. Matt joined the Eagle Jazz Band in 2004 at the ...

Tim Jones – Drums, (son of drummer Allan Jones) has been around the jazz scene since the 70s. H...