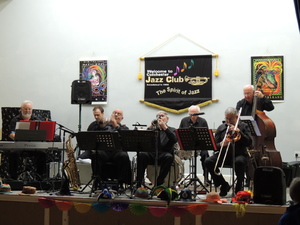 The John Maddocks Jazzmen Hail from Dorset and Hampshire, they reached their 40th birthday in 2011.
John had previously enjoyed success with The Black Bottom Stompers a band which he formed whilst in London and which still exists today.
The Jazzmen have their own sound brought about mainly by the unique style of John’s clarinet playing. John was originally inspired by the fine clarinettist Johnny Dodds, but John is his own man and encompasses influences from all over the traditional jazz spectrum. Personnel changes have been few over the years but one or two in the band can still claim to have been at least twenty five years younger when they first joined. The Band is well known for its drive and cohesiveness and the inclusion of some seldom heard tunes in the repertoire. The band continues to be popular for all kinds of functions throughout the UK including most of the major jazz venues and festivals, also toured extensively in Holland, Germany and Belgium. There have been broadcasts and many CD issues. The CD from PEK sound ‘Behind Closed Doors’ is now available.

Banjo and Guitar player with the John Maddocks Jazzmen

Chris Gower: Chris is a fluent trombonist with a great sound. His influences range from George Ch...

John Hall – Drums - A very experienced drummer who has played professionally most of his career...