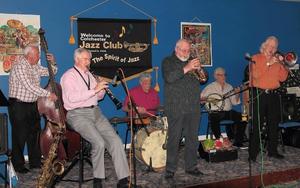 Jimbo a well known 'Character' on the jazz scene, noted as the leader of many brolle parades at jazz festivals, has invited six well known musicians to form a band known as Jimbo's All Stars

John Crocker – Reeds - Plays mostly clarinet but is also heard on alto and tenor saxophone. He...

George (Kid) Tidiman - Trombone and vocals – George is no newcomer to Colchester Jazz Club, he...