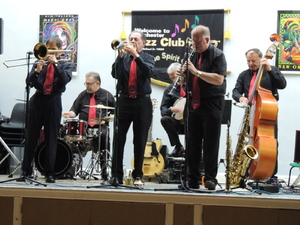 Jeremy Huggett formed the Dart Valley Stompers in July 2005 with the intention of playing lively exciting music in the New Orleans and Traditional styles of jazz. The Dart Valley Stompers six-piece line- up, featuring some of the top musicians in the UK, quickly gelled into an efficient unit and established a reputation in their native South Devon, also, within the first three months of their existence, they recorded their debut CD entitled “Down by the Riverside”. An ideal band for jazz clubs, jazz festivals, corporate functions – in fact any venue or occasion requiring top-class entertainment.

Keith plays a Double Bass for the Dart Valley Stompers. No musical profile is available

Chris Stockings - has been playing drums since he was a child in a variety of musical settings r...

Kevin Grenfell – Trombone and Vocals. Started playing trombone at the age of 11. After playin...

Graham Trevarton – Cornet, Trumpet and Vocals – He started on cornet at an early age and was ...