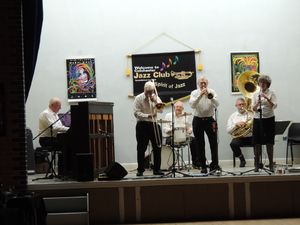 Bob Dwyer’s Bix and Pieces. One of London’s most versatile swinging traditional jazz bands, listening and dancing to the band is fun and most entertaining experience. The musicianship and knowledge of the music played is of the highest quality. Bob Dwyer’s earlier bands were his Hot Six, then his Hot Seven Band, which was formed in 1988. In June 2009 Bob announced that The Hot Seven band, which made its last performance on 23rd October 2011, will change its name to the Bix and Pieces jazz band.

Was the drummer in the Temperance Seven band

Bob Dwyer – Trombone – Bob has been playing in Jazz Bands since 1956. A seventeen year stint...

Hugh Crozier – Pianist – one of the best exponents of Jelly Roll Morton style of piano playin...